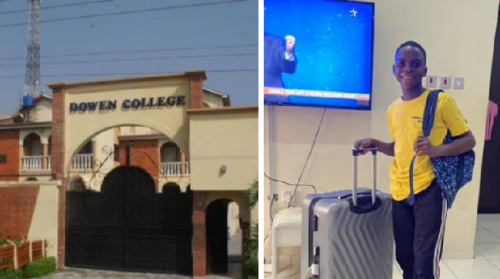 Dowen College, Lekki, Lagos state, will not reopen on Tuesday, January 4 until the inquiry into the death of Sylvester Oromoni, reaches an advanced stage, according to the Lagos state administration.

This comes as other private elementary and secondary schools in Lagos prepare to reopen on Tuesday, January 4 for the start of the second term.

Oromoni passed away on November 30, 2021. Days before he died, his family claimed he was beaten by several of his seniors.

The Lagos state government ordered the school’s indefinite closure on December 3, 2021, in response to the incident’s public uproar.

In an interview with Newsmen, Ganiu Lawal, assistant director in charge of the Ministry of Education’s public affairs, said the school would reopen shortly, but not until ongoing investigations into the unfortunate incident reach an advanced stage.

According to Lawal, since the matter was not strictly a state matter and with the involvement of the police and other parties, it would be ideal for all t’s to be crossed and I’s dotted.